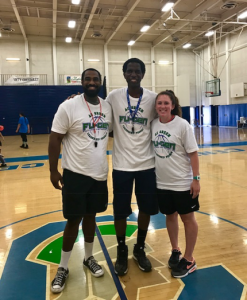 For 3 days ICE intern Nicole Ballestero had the opportunity to work at the AC Green Leadership Camp.  Below, Nicole shares her experience both at the camp and the preparation leading up to the 3-day event that was held at Century High School in Santa Ana.

Upon arrival at the camp, I was greeted by Michael Galindo, on-site Orange County organizer, with a warm smile.  There was no denying his energy and passion for helping at-risk and low socio-economic status youth.  His vision for the first Orange County version of AC Green’s camp was full of potential.  Mike recruited baseball, basketball, and football coaches to help coach the many kids he anticipated would attend the camp.  This number blew me away, and when 160 kids showed up to camp on Monday July 31st, I had to take a deep breath for all the energy I was about to encounter. 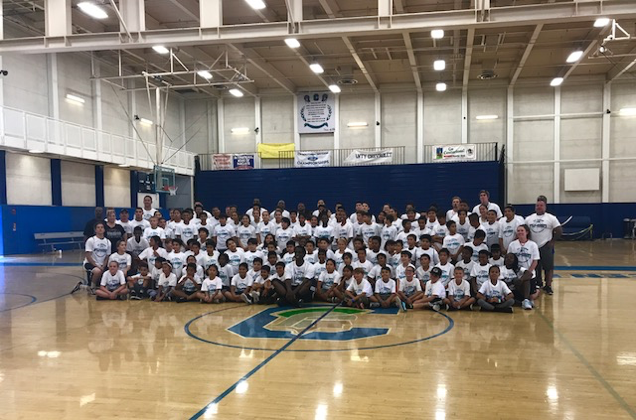 Meeting AC Green was such an honor; his passion for helping the underprivileged youth population was so genuine as was his interest in getting acquainted with the staff with whom he would be working.  He took the time to ask me some questions about myself, and all of the other coaches.  He also said a word of prayer before he addressed all of the campers.  AC was a constant figure during the camp and was an active participant in the basketball, football, and baseball breakdowns the camp offered.  As if this did not impress me enough, AC also made sure the kids participated in a character development classroom session all 3 days, as well as a lesson in finances.  AC is truly dedicated to preparing these youth for the future.  It was obvious his goal was not just to teach them how to dribble, catch, and pass a ball.  It was amazing to see all of the volunteers who came to help with the camp; some whom had worked with AC for years, and those like me who were participating for the first time.

The kids who participated had so much energy, many of whom were attending a camp for the first time.  They were in awe of AC and the things they were experiencing.  I was so impressed by the way he and Michael interacted with them and worked non-stop to make sure the event went as planned.  My role was to work the basketball portion of the camp.  As each group rotated through my station, their energy only increased; the heat and humidity did not phase them one bit!  Snacks and lunch were provided for all of the participants each day.  They were so thankful every time they came to get their food.  Talking with them at lunch was a highlight for me.  Getting to know their stories and backgrounds was amazing, as they were so resilient given the many hardships most of them have faced.

The final day of camp was the most special as each kid was given a medal and a backpack full of school supplies.  Each kid was so thankful.  It was apparent that AC truly did more for them than just provide a camp experience.  I learned a lot from AC and Michael through their organization of this camp.  They see the bigger impact sports can have on kids.  I am thankful for their service and can’t wait to work with them both in the future.